The paid advertisement feature has introduced a number of flexible updates to customize your target audience as per your need. You cannot just randomly run your advertisement campaign on Instagram like traditional advertisements, where a lot of advertisement efforts are wasted in the wrong audience. 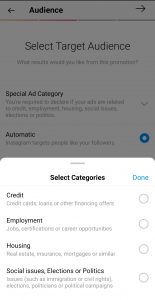 If you are a writer posting your poetries or quotes, you can choose a special category of audience who likes to explore writing contents. Instagram algorithm works in such a way that your advertisement reaches such an audience, whether they live in the USA or Australia. Same goes for restaurant owners. They can customize their advertisement to reach the local people or little far from them and they can also customize the advertisement to reach the audience who are food lovers, loves to explore new cuisines, food bloggers and much more.

A food blogger can see your post from India and you live in London. A makeup lover can see the makeup artistry of a Turkish makeup artist sitting in Tokyo. Geographical location is just on your hand.

Similarly a makeup brand can choose only females to view her advertisement as the majority of buyers are females. This can reduce the wastage of advertisement to the wrong target audience who will just scroll up the paid advertisement post which will waste your budget.

Baby product items can customize their advertisement according to the age group of the majority of parents because advertising the baby products among teenagers will be a waste of effort. Hence targeting the right age audience is a must in achieving certain products.